Plant a tree in memory of Alma
An environmentally-friendly option 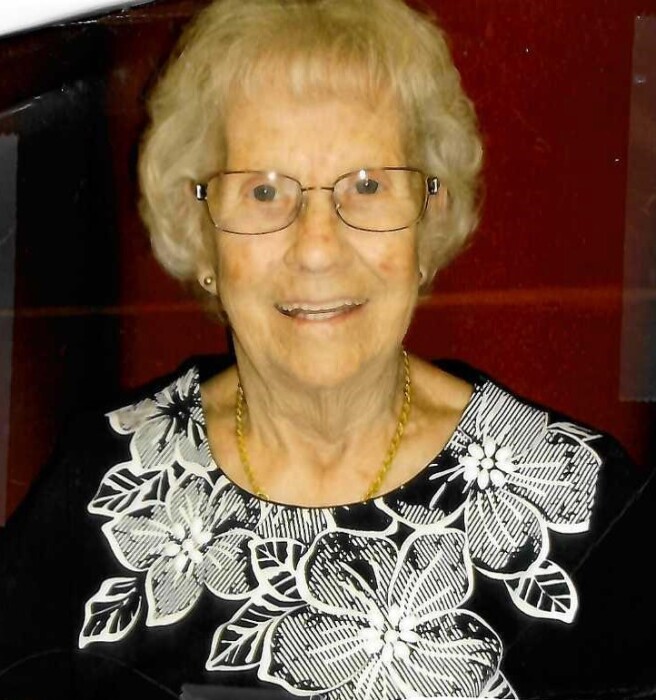 Alma M. (Connelley) Garcia, 100, of The Arbors died Thursday 4/1/21 at home. She was born in Buckland on May 2, 1920, the daughter of Frederick and Anna (Anderson) Connelley. Alma grew up in Buckland, attended Crittenden Grammar School and was a graduate of Arms Academy, Class of 1938.
Alma was married to John P. Garcia on May 3, 1941. They were married seventy three years when John passed in 2014. Alma worked in many retail stores in Greenfield before taking a clerical position with Pioneer Valley Cablevision in 1965. She retired in 1982 as their office manager.
Alma and John were avid golfers, bowlers and fishermen. They also enjoyed going to the casinos. Las Vegas and Atlantic City were among their favorite vacation spots. In 1996, they took a trip to Alaska and spent two weeks on a cruise up the inside channel. In 1999, they spent two weeks in Spain and visited Morocco while there.
Alma loved sewing, knitting and crocheting. She also spent many hours on her computer making all her own greeting cards. Many people received homemade cards from her for numerous occasions. For many years, Alma played Mah Jongg weekly with a group on friends.
After the loss of her husband, Alma moved to The Arbors of Greenfield where she made many new friends and enjoyed participating in numerous activities. She was loved by everyone there.
Alma is survived by her three daughters, Joanne Hastings and her husband Mike of Gill, Jeanne Kamansky and her husband George of Leverett, and Gail Mitchell and her husband John of Sunderland; three grandchildren, Scott Kamansky of Leverett, Justine Mitchell of Winston-Salem, NC and Luke Mitchell of Sunderland.
Besides her husband John, Alma was predeceased by two brothers, Carl Connelley and Donald Connelley, and a sister, Doris Connelley, all of Buckland.
Alma's family would like to thank all the staff at The Arbors for making her years there so pleasurable, as well as the Hospice staff and private aides that cared for her in her final months.
Funeral services will be private and will be followed by a Celebration of Life later this year.
In lieu of flowers, memorial contributions may be made to Pioneer Valley Hospice, 329 Conway Street, Greenfield, MA 01301 or to the Franklin County Sheriff's Office Regional Dog Shelter, 10 Sandy Lane, Turners Falls, MA 01376.
Arrangements are under the direction of the Kostanski Funeral Home. For condolences, please visit www.kostanskifuneralhome.com.

Plant a tree in memory of Alma by clicking here.
To send flowers to Alma's family, please visit our floral store.

Plant a tree in memory of Alma
An environmentally-friendly option

Plant a tree in memory of Alma

1 tree planted in memory of Alma

I got to know Alma through my job and thoroughly enjoyed talking with her and getting to know her.  We had great conversations about the Red Sox.  I am deeply sorry for your loss.

Both Johnny and Alma will be missed by everyone whose lives they touched.  They both touched my heart even as a young neighbor.  They had such good natures, nothing ever seemed to bother them.  They were first in line if someone did need help.  It was far more than a pleasure to have known them.  Not just a great thing to have had them in my life, I am sure it was one of the luckiest gifts I was ever given.

Goodbye, Alma, know that you both were loved and respected.  Now you can, once again, see Johnny.  Now you both can, again share that unconditional love.  You both deserve it.

A Memorial Tree was planted for Alma M. Garcia

Plant a tree in memory of Alma